This is a blog devoted to the places and happenings of Manhattan. But just this once, I am stepping off the island to highlight an upcoming event in Brooklyn. This weekend, June 6th and 7th the annual Renegade Craft Fair is coming to McCarren Park, Brooklyn.

I attended this outdoor craft meet four years ago and I plan to go again this year. For anyone that gets excited about bookmaking or who regularly visits Flat Iron's Paper Presentation, this is the event for you! With over 300 crafters gathered to showcase and sell their wares, you'll see everything from sewn items, jewelry, papers, knitted wares, posters and prints, photography, soaps, silkscreens, zines, comics, clothing and handmade home decor. By the end of it, no doubt you'll be scratching your head and saying "Why didn't I think of that?" and be planning to open your own booth next year.

The event is free and open to the public. Take the L subway line to Bedford Ave. and walk north on Driggs Ave. until you reach the park.
Posted by Lindsay Kurz at 4:46 PM No comments:
Labels: Art + Culture, Events, Free, Outdoor

Open your Mind, Not your Wallet

I wanted to announce another center in town that offers great free classes: The Open Center. I just attended their free introductory seminar of "Healing with Whole Foods and Chinese Herbs" last night. Though I might be a bit skeptical of some aspects, I enjoyed learning the basics of Chinese medicinal theory.

To sum up The Open Center, as described in their welcome statement, they are " dedicated to offering educational programs and cultural events that expand the mind, nurture the body and awaken the spirit. We offer workshops, classes, lectures, conferences and professional trainings, led by teachers of wisdom, passion and skill. Thousands have come through our doors finding fresh intellectual perspectives, paths of healing, deepening of their spiritual lives and new careers that allow them to be of service and express their true calling."

I myself admit that I am dubious of the more far-fetched practices involving "chakras," "life force" or most things with "spirituality" in the title. Still I enjoy learning about everything, and am open to trying new things. They offer a variety of multi-week long classes (that you pay for), but many of these classes start off with a free introductory seminar open to anyone. I should note that many of the multi-week long paid-for classes are in fact not that expensive themselves.

Topics range from Belly Dancing, Aromatherapy, Learning to play the Native American Flute, Prana Yoga Teacher Training, How to Communicate with Difficult People, Myofascial Trigger Point Therapy and hundreds more. From massage to spirituality to eastern medicine to psychology they cover a wide breadth of topics loosely under the holistic health and wellness category. They also have a shop that carries an eclectic selection of books, world music, cards and aromatherapy products.

The Open Center is located in Soho at 83 Spring Street (but next month they are moving uptown to 22 East 30th street). To attended a free introductory seminar pre-register by calling 212.219.2527 x 2.
Posted by Lindsay Kurz at 9:18 AM No comments:
Labels: Education, Free, Living 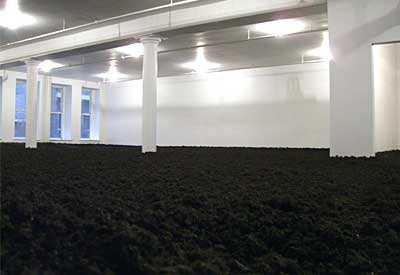 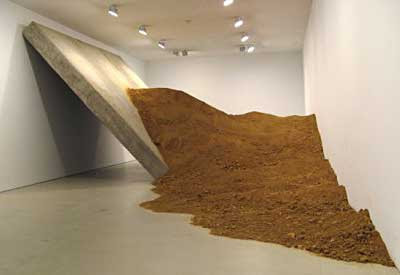 With "Art Museums" showcasing toilets as sculpture and elephant poop as art you'd think you could just throw some dirt in a room and call yourself an artist. Wait, (shocking) that has already been done here in NYC. Actually twice. In fact - even stranger - twice on Wooster street, to be exact.

Yesterday while strolling through west Soho, I visited two, totally separate, galleries that were each a large room full of dirt. The Earth Room at 141 Wooster street fills the entire second floor with about a yard deep of dark rich earth, or 280,000 pounds of it. The gallery has a wonderful mossy earthy smell, much like the smell of old houses in the East in the humid summer months. I have to say that it was an interesting and usual site - quite a weird juxtaposition of an urban Soho loft with the expanse of natural earth unnaturally filling the space. The dirt is very dark, soft and fertile looking. Apparently they mist the dirt and rake over it several times a week to keep it in shape. The Earth Room opened and has not been altered since 1977, and so I wondered, quite practically, if the floor of the loft has decomposed at all? I also wondered if gallery viewers are ever tempted to throw a handful of seeds across the art? One also inevitably thinks about what a large and beautiful Soho apartment this would be sans the dirt.

The second stop on Wooster street was the Peter Blum Gallery, just south of the Patagonia store. The one-room gallery simply holds one large slab of concrete leaning against the wall, with mounds of dry reddish looking dirt piled against the concrete. This dirt is entirely different, instead of looking rich and agricultural it had the feeling of dirt dug up at a construction site and left to bake dry in the sun. The interesting thing about this exhibit is its theatrics of presentation: You can walk under the exhibit to the back side to see how it is constructed. Like a theater set, the "concrete" slab is a hollow prop. The "mounds" of dirt aren't really mounds, but instead just a thin layer of dirt spread across a hollow hill of wire mesh and canvas. 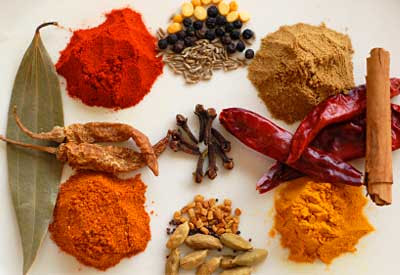 One of my favorite cuisines is Indian, and luckily New York does not disappoint in its quantity of Indian restaurant offerings. From the upscale Indian tasting menus of Devi to the colorful take-out joints like Curry in a Hurry, Indian food is never far. Though Indian restaurants can be found anywhere in Manhattan, the two competing Indian epicenters seem to be Curry Hill in Murray Hill and Brick Lane in the East Village.

Curry Hill roughly stretches from 30th to 26th on Lexington, and overflows somewhat on the the side streets. My favorite in this neighborhood place for a good chicken mahkni is Curry Leaf, which is on Lex at 27th. The pricing of the Curry Hill restaurants varies much more than on Brick Lane. You can find extremely cheap (and somewhat dingy) takeout joints as well as more upscale chic restaurants. In addition to restaurants, Curry Hill holds a variety of various Indian shops - from sari shops to grocers. The best thing to be found in this neighborhood is Kalustyan's grocery (on Lex between 28th and 27th). Kalustyan's is a grocery offering exotic foods (with a bent more toward Middle Eastern than Indian). Explore the shelves for labne (heavy cream), baklava, teas, incense, spices, dozens of varieties of rice and lentils and all sorts of tasty international treats.
Posted by Lindsay Kurz at 2:23 PM No comments:
Labels: Food
Newer Posts Older Posts Home
Subscribe to: Posts (Atom)