Try Tai Chi. Why Not? 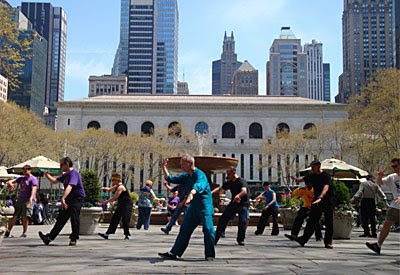 Today I tried the free Tai Chi class held at Bryant Park. Every Tuesday and Thursday morning, from 7:30-8:30am, (April - Oct) there is a free and open Tai Chi class given by the Tai Chi Chuan Center. Though early in the morning, it felt refreshing to be awake, stretching and moving in the cool morning air at the Park. At 7:30 the Park is still and fairly quiet, but by the end of the class the Park is flooded with the usual Midtown crowds rushing to work.

The class was fairly basic and is accessible to all skill levels and ages. There were about 25 students this morning. The founder of Tai Chi Chuan Center, Master C.K. Chu leads the class and 2-3 other assistant instructors move around the open air "classroom" correcting postures and positions.

The class is held, rain or shine, at the Fountain Terrace (at the west end of the park).
Posted by Lindsay Kurz at 1:00 PM
Labels: Education, Free, Outdoor, Wild Card