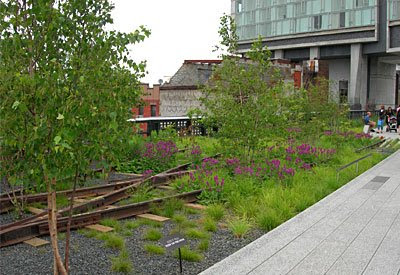 PHOTO BY Lindsay Kurz
Bursting on to the scene at the turn of the century (that's the recent turn of the century, folks) the Meatpacking District was just too cool. With trendy clothing boutiques and faux dive bars popping up next door to every meat packaging house left, the turn around was so quick one wondered whether the lingering smell of beef carcasses was supposed to be part of the ambiance.

The Meatpacking District today is still, of course, cool, but not like it was seven or eight years ago. The darling of the neighborhood, the Chelsea Market is still visited but it is not talked about as much as it once was. Evidence of this slowdown in hype is the simple fact that the meatpacking operations were not completely "gentrified-out," as you will notice if ever you visit the area in the early mornings and stumble across the refrigerated vans unloading their goods.

However, this summer the Meatpacking District is cool again. With the opening of the much-anticipated (semi-urban-legend) Highline last month, the buzz is again re-focused on this neighborhood. (On the opening weekend in June the queue to see the Highline stretched around the block).

In keeping with the neighborhood's self image, the Highline is an exhibit in sleek lines, steel and concrete and a capricious pattern of gardens. Not wanting to be mistaken as trying to hard, the garden colors are variations on lavender, sage and white, making the statement that its design does not need to rely on flashy, overly-saturated flowers for effect. The vegetation almost feels alpine, with aspen trees and grasses, - giving the effect of a Colorado ski resort in the springtime.

The Highline currently stretches from Gansevoort street to 20th Street (above 10th Ave.) Along the way the elevated path swerves left and right and even meanders through a newly constructed apartment building. With views of the Hudson River to the west and the neighborhood streets below, you'll have to admit that indeed, this is cool.
Posted by Lindsay Kurz at 9:57 AM
Labels: Free, Living, Outdoor